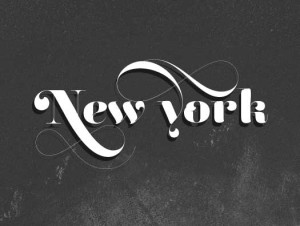 In the last couple of months I’ve had a baptism of ice, sleet and snow. Wintery Christmas in New York was as storybook and postcard as you could want it. While it can be hard to avoid getting lost in clichés when you’re living in a city full of them, there is undeniably so much authentic character in the streets, buildings and people.

The rich variety of faces walking past on any given street really cements the feeling that you are at the centre of the world, where everyone has come to. The people watching here is next level. The overheard snippets of anecdotes and mutterings open a flood of imagined strangers’ life stories and characters for songs.

The introduction to proper winter has forced me into the infinite hidden nooks of the city. While there are of course the expected chains like Starbucks, I’ve been pleasantly surprised by the number of seemingly independent establishments: the wee delis, bars, diners and record stores that seem family owned, and to have stood for years. It gives the impression that the most unassuming of places have a long history with endless stories held in the walls.

The epitome of this is surely McSorley's Old Ale House in East Village, the oldest bar still standing in the city. They claim that no piece of memorabilia has been removed from the walls since 1910, including turkey wishbones hung above the bar by boys going off to World War I. Apparently they were good luck charms to be reclaimed when they returned, meaning the dusty-covered wishbones that remain are from those that never did.

In the small snippet of the USA that I’ve seen so far, everywhere you look there are remnants of an intense, hard history of nation building. Taking train trips to both upstate New York, and down to Washington DC left me trying to fathom the unfathomable amount of dreaming and sweat and suffering it took to build this crazy-big country: the rail roads, the skyscrapers, the tunnels.

Coming to terms with the much bigger musical pond I’ve found myself bobbing in over here has been a test of motivation and confidence, and these artefacts of the optimistic, striving American character of old have actually been pretty inspiring. I’m not talking 1950s American dream, but 1850s American hardship.

With the big shakeup of an international move, I’ve also found it easier to write autobiographical lyrics, and the unique history here has definitely permeated my writing with universal and personal significance.

I’m excited about the other artists I’ve met over winter here and, as the weather hopefully thaws and lets us outside, the next few months are shaping up to be productive and collaborative ones.